The Peoplecount team served on the organizing committee and attended the 4th Annual Ad Club Out-of-Home Showdown at the elegant Arcadian Court in Toronto, with art deco surroundings and a Speakeasy theme. Peoplecount sponsored both the registration table and the luncheon table centrepieces.

Peoplecount recently unveiled a new logo and tag line which will be launched at the Toronto Ad Club's OOH Day on October 8, 2015.

"Good research tells a story. Do you know yours?" reflects Peoplecounts insight in cutting through the clutter of big data and finding the brand story in the numbers.

The Peoplecount team were thrilled to attend the 2015 OAAA/TAB National Conference in San Diego. The "Amplify" theme was reflected in an exciting roster of speakers with emphasis on audience engagement technology such as beacons.

Peoplecount celebrated its 20th Anniversary of incorporation (formerly Transearch Group Inc.) on March 21, 2015 with a reception at its Loft offices in downtown Toronto. Clients, business associates, current and past employees, family and friends gathered to toast the milestone event.

The Peoplecount team served on the organizing committee and attended the Advertising Club of Toronto's 3rd Annual OOH Showdown at the Allstream Centre in Exhibition Place. Peoplecount sponsored the registration table and enjoyed the "Mad Men" themed venue and cocktails.

"Team Breastscount" marked Dress for the Cause Day, one of the Breast Cancer Awareness Month activities across Canada, with pink garb and pink treats, all in the name of fundraising for the breast cancer research.

The Peoplecount team attended this year's 2nd Annual Ad Club OOH Showdown at the Fermenting Cellar in the Distillery District. Peoplecount served on the organizing committee and sponsored both the "Best in Show" category and the table centrepieces. Set to a James Bond theme, the oversized martini glasses (shaken, not stirred) added just the right ambience to the historic Fermenting Cellar room.

Kelly McGillivray presents "Making Headway: Transit Media Metrics (and the Blueprint for Other DOOH)" at the 2013 Digital Signage Expo in Las Vegas, NV. The presentation first offered a blueprint for transitioning DOOH Audience Metrics from the current "guidelines" to a legitimate audit methodology. Peoplecount's current work with the Traffic Audit Bureau in developing and implementing Transit Media Metrics is presented as a specific case of this audit process.

Kelly reports on the status of Transit Media audience metrics in the US following the completion of Peoplecount's metricsl development contract with the Transportation Research Board in Washington, DC, and the initial implementation stage with the Traffic Audit Bureau.

The Advertising Club of Toronto held its first annual competition of out-of-home media suppliers' campaigns, "Out-of-Home Showdown" at the Liberty Grand. Boxing legend Spider Jones was the celebrity guest with Crystal Koskinen hosting the boxing-themed awards dinner. Peoplecount served on the organization committee and sponsored the "Best in Show" category.

The Peoplecount team attends the 2012 TAB/OAAA National Conference, "Catch the Wave" at the legendary Hotel Fontainebleau in Miami, FL.

The "Audience Measurement for Transit Advertising" report by Peoplecount (with input from the Traffic Audit Bureau) is published by the National Academies of Science in Washington, DC. The publication marks the conclusion of a two-year study with the Transportation Research Board's Transit Cooperative Research Program (TCRP), for which Peoplecount was awarded the contract after an RFP was issued by this US government organization. The report examines the current state of transit advertising audience metrics both in the US and worldwide, details original research and model development by Peoplecount, and recommends an implementation plan for transit media metrics across the US.

Peoplecount's Loft office served as the set of a PR firm in the Canadian crime drama series "King" on Showcase (Season 2, Episode 13).

Celebrating "The Great Outdoors" at 99 Sudbury amid a backdrop of fall leaves and branches, Peoplecount sponsors the Poutine Bar and promises "Rich Data, Self Served" with the launch of its self-serve traffic count website, www.GetTrafficCounts.com.

The Peoplecount team embraces the theme Grab Your Share at the beautiful Hotel Fontainebleau in Miami.

Kelly McGillivray, President of Peoplecount, talks about the types of research and metrics available to Digital Out-of-Home media providers and how to use early research to tailor your new DOOH network to suit the audience and the venue environment.

Peoplecount was shortlisted for a MIA in the Media Research category for its "Mobilecounts Audience Measurement" submission, in which audience metrics and ad message recall were measured for a vehicle-based mobile advertising campaign executed by OMD for McDonald's Restaurants. Mango Moose operated the dedicated advertising vehicles in Atlantic Canada.

Kelly McGillivray, Peoplecount's President and Chief Methodologist, was interviewed by Keith Kelsen and quoted several times in his book "Unleasing the Power of Digital Signage: Content Strategies for the 5th Screen". Kelly specifically addresses measuring the effectiveness of digital signage. The paperback was published in January 2010 and is available on Amazon.

Peoplecount announces the release of its 2009 Canadian traffikcounts data layer

Peoplecount awarded the contract through RFP as the supplier to the Transportation Research Board in Washington, DC for the “Audience Measurement for Transit Advertising” research project, a 24 month contract

Kelly McGillivray, President & Chief Methodologist of Peoplecount, presents “People On The Streets” at the Canadian Institute of Transportation Engineers Annual Conference in Montreal 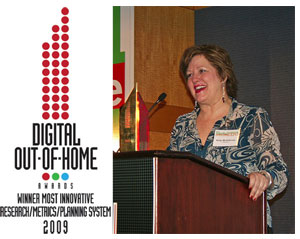 In one of my roles as a member of the Technical Committee of the US TAB initiative, which is working to bring reliable audience measurement to the whole of the US market, I have been working for some years with the team from Peoplecount to develop a crucial piece of the US industry model.

The team at Peoplecount consistently impressed me with the breadth of their understanding and technical expertise in the area of mobility. They delivered timely solutions to problems we posed them and worked in considerable harmony with our committee.

In a project of this scale it was a great benefit to have such a flexible and imaginative team delivering this measurement expertise, and refreshing to obtain this both on time and on budget. I am sure I will be using Peoplecount`s expertise in other markets around the world in the future.”
– Neil Eddleston, Managing Director, JCDecaux, London, UK

I am delighted to offer the highest commendation to any company considering Peoplecount for a major project. Kelly McGillivray worked very closely with the Traffic Audit Bureau on their new pedestrian count database which was delivered on time and on budget. This now forms a cornerstone to the Eyes-On ratings for 200+ DMAs expected to be released to the industry by TAB shortly.”
– Tony Jarvis, Independent Research Consultant, New York

The methodologies developed by Peoplecount were, in fact, technically sound and innovative, allowing NEWAD to win a CMDC Media Innovation Award for Marketing Science Advancement. Peoplecount has respected the timelines and budget agreed upon for these projects. They are professional and knowledgeable.”
– Philippe Marchessault, Executive Vice President and General Manager, NEWAD, Montreal

Zoom Media has worked with Peoplecount on updating our circulation for three of our indoor networks and we have been very satisfied with the professional approach and quality of work provided to us. We have once again selected Peoplecount to provide revised circulation for our networks this year and look forward to working together again.”
– Andy Querin, President and Chief Operating Officer — Canada, Zoom Media, Toronto

Kelly has years of experience in the Out Of Home Measurement business. This experience has brought her a depth of knowledge that is un-matched in the industry.”
– Kim Moran, Former COO/CFO, Gallop & Gallop Advertising, Toronto